Be the first to find out
what´s new at econ.

Pick up all the latest about our products, events and
state-of-the-art-technology. Straight to your inbox.

Thousands of tons of oily wastes are produced every day. We are excited to announce that Global Environmental Management Services Ltd. (GEMS) / Saudi Investment Recycling Company (SIRC) and econ industries officially took their #businesspartnership one step further. With the beginning of next year one of our VacuDry® plants will be treating various industrial hazardous wastes including several tons of NORM waste in the Kingdom of Saudi Arabia. And this means one step further toward a more #circulareconomy worldwide.

Naturally-occurring Radioactive Materials or NORM occur naturally as the name suggests. However, certain work activities can give rise to significantly enhanced exposures that need to be controlled. For typical NORM material, exceeding the acceptable yearly radiation dose is what is concerning, rather than any immediate health effects.

A second term, called TENORM is also used quite often: Technologically Enhanced Naturally Occurring Radioactive Materials. TENORM occurs when the level of radioactivity in NORM has been increased due to human activities.

Interesting Fact: one material with the same radioactivity may be regarded as NORM waste in one country but not in another. 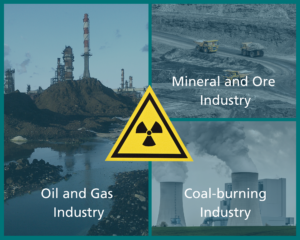 Certain industries handle significant quantities of NORM, which usually end up in their waste streams. NORM requires strong expertise to assure the safe disposal and maintain compliance with environmental regulations.
Typical industries with higher exposure to NORM are:

Radioactivity cannot be “destroyed”. Therefore, the goal is to permanently limit the exposure to humans. This can be achieved by avoiding NORM material to spread through leaching, contamination carry-overs, dusting, or else.

econ’s VacuDry® technology separates the fractions of the waste through thermal separation, braking up a difficult to handle radioactive, oily sludge matrix into clean water, clean oil and solids. The radioactive material will remain in the solids. The extracted water and oil will be free of any radioactivity.

As a result, the mass of the NORM waste is significantly reduced. Secondly, only when the solids are oil-free can they be immobilized using cement or geopolymer. Lastly, the immobilization leads to a reduced surface (close to zero leakage), a solid binding of the material (no dust emissions) as well as stable material with a vastly reduced risk of contamination carry-over. The NORM material is now ready for safe long-term storage.

Are you looking for a solution regarding your NORM waste? Don’t hesitate to contact us….